Thats the title of the picture i am posting!!! I actually had this picture done a few weeks ago.....but oh well. This one was very....interesting, because hes not a fanart, and hes not an original character. This guy is actually someone real xDDD

I know hes HUGE but....actually...hes HUGE D: and he aproved the volume soo this is the closest to reality (in anime form) i can get. It was an inetresting experience and the model is soo nice :3

I need to convince him to cosplay as Chris Refield somehow D:!!!!

Anyway, here is another version: 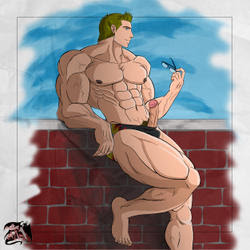 Ehem, i have something descent to show!! Yay!!!!

Well, people, thanks for your visit, thanks for your comments - i already reply to them -, i still need to check updates on Y! Gallery but....i am going to visit all your blogs and leave loads of silly comments...that sounds like a lot of fun but very time consuming too xDDD

I had a terrible insomnia last night...i was "O-O" all night!!! Didnt sleep not even a single bit!!!! In the tiresome morning i had an important apointment at 12:30 am....i was getting ready but i had this horrible feeling, this disguting urge to be on Perisur at that same hour D:!!!!

Soo i went to Perisur mall and i arrived there at 11:30 am

Today 7 july, Hideo Kojima, the man behind Metal Gear Solid was in my city in a meeting with fans. I knew about it a week early just by luck and i never expect to actually have a chance to meet him in person!!!!

I was.....pretty far away of the mall actually :(, just half an hour after the opening of the mall and we had 400 humans there in the line :(

Not even PSPs could distract us too much. All people had theyr games and a couple of Play Arts Kai for the event and the sun was soo hot....and hours later a strong rain was over us and yet we where still there >_> and more people was coming!!!!

I see lots of awesome MGS t-shirts and make friend with a few of the people in the line. I didnt knew Mexico had soo much MGS fans before!!!!

Later on a Konami employee arrived with posters o_o and he started to give.....to have taken all this posters, people was literally riping them off from his hands xD

Isnt a bit too early to promot this game?

Anyway, we where kinda distracted with this posters and suddently all people started to run to the front of the line and i was like "0_o wuth? *prepare for runing*" but it was a man from the mall....he told us to please, leave...because Kojima was only going to meet with 100 fans and we had no chance to meet him >_>.....of course - NO ONE LEAVES -.....more people started to arrive minute by minute

It was...pretty raini.......And Kenichiro Imazumi was there!!!! Walking in betweehn the people filming us like strange apes specimens and he was "0_0"(hes part of Kojimas team, produces of MGS 4 and SH 2 and the main voice in the Hideo Radio)...i wish i was able to ask him an autograph too :D

5 pm and Kojima was already in the mall o_o with 30 fans and the rest of us outside in the rain.....i am not sure wath happened but i think they didnt expect to have this much people in the event....

Then we started to move slooowly, 50 humans of the line enter in the mall....aparently Kojima knew we where outside >_>

Then the security guard make other 50 humans to enter and i was only 4 humans away now!!!!! And he says: OK, this is it, no more people...the next half an hour is going to sign those last 50 persons items, the rest of you cant enter

And we run in a kind of histeria state on all the parking and inside the mall, and the rest of the line hear it.....soo instead of 10 we had like.....500 humans runing in pure madnes towards Hideo Kojima!!!!

Kenichiro Imazumi was there!!!! Covering Kojima with his big body!!!

He was soo cloooosssseeeeee......and he notice the histeria and desesperation i our faces D: soo he end leting more people enter to the event :D!!

I finally reach him, i give my items to his assistant (a japanese woman) and then i enter the stage...the take pictures of me >_>.....and Kojima take my MGS 4 artbook and looked at the inside - aparently i was the only one who bring the artbook >_> - and leaves hi sign on the cover saying "muchas gracias" in a weird spanish, the my MGS 3 Subsistence game, he leave his mark and smilled at me, i said "arigatou" and he said "domo" and we shake hands

I feel like i was going to have an aneurysm D:

Outside of the stage i meet again with the people that was in the line with me, we huged we cryed we screamed i dunno if we kissed but we where very happy o0o!!!!!

There was a Harry Potter event behind Kojima...and it was compeltelly ignored all day

Here is a pic in the front side:

It was a pretty.....horrible designed event.......98% of the fans where left outside on the rain for 6 or more hours while other random people from the mall get Kojimas sign before us, there was like...3 different lines and that was confusing.......and i dont know who to blame about it, Kojimas crew looked really histerycal while dealing with the infinite waves of human beings around them

In the end, the poor Kojima didnt meet 120 fans but 800 in 2 hours and a half wich was a record but also 2000 fans where left outside with empty hands xD