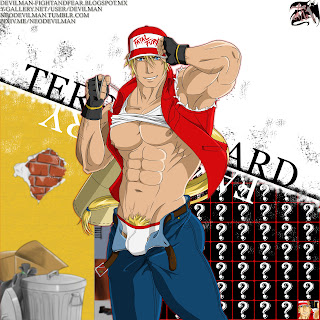 Since Terry was a wandering fighter much like Ryu, i always wonder how he could pay for stay one night in someone else house in the city his visiting? While Ryu is "inoccent" and deffinetly serious, is pretty obvious Terry worryes much more over his looks and know he is good looking. Maybe he take advantge of it and offers some fun and "services" to the owner of the house for a bed and some food?

That was my fantasy over Terry Bogard. Back in the middle of the 90s, when i was a teen, i tough he was as hunky looking as Ryu, tough i am surprised now that most people dont like him at all, it seems he is too bishounen to be bara? I guess he really is a pretty boy with long hair but i always find him pretty beffy and hunky and reminds me a trucker more than a bishounen.

I guess is not important if he is a bishounen or a bara, i like him a lot and i wanted to show my love for fight games men with a series of images and he looked like a good start, since he is one of the most iconic and classic characters and now day he is not getting too much love at all under the shadow of Street Fighter V. 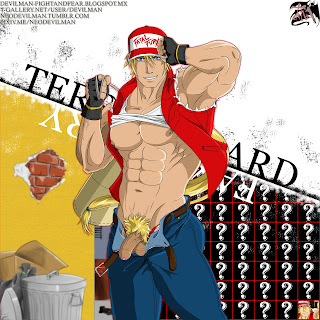 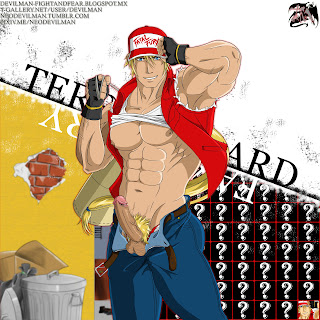 I said i finally had something new to show and here it is!!! I actually had this finished a long time ago but i wasnt sure to post it, i felt pretty insecure about the quality and i hated the background too. I did a fight ring behind, a city, even a pixel landscape and i hated every version of it until i decided to make a character select design for him. I really wanted to make it feel like a fight game illustration (and drawing an arcade behind would be awkard).

It also evolved from a mini comic into a pin up with various versions, a "sexy" and two "pornish".

Like i said, maybe he is not bara enough but i hope someone else (besides me) enjoys this. Expect some more fighters to come up like this soon.
Posted by DEVILMAN at 7/17/2016 07:17:00 PM No comments:

Yuuuussss!!!! I am back tough i actually never leave....

I dont want this place to be lost forever and ever, but i been thinking on the rigth way to re-laucnh this blog. With all the issues last year of Blogspot changing its rules, all my images are no longer hosted in here it seems. I wonder if its a good idea to re-post them once more? Its just old stuff that most people already saw i guess.

I also didnt wanted to post in here without nothing new to show and i actually have new art to show!!! But i will do another post for it.

In this time i had a lot of technical problems, art blocks and a lack of time dedicated to art since i had to change my job and i was left with only a couple of free hours a day. I even still own art to people from last year, something i will fix for sure!!!

I dont know how frequently i will update this place, i need to be back in track with art but i promise to make this place interesting again, give it some life in the short therm. I also saw people who wanted to contact me??? I am sorry for my lack of presence in here but with Y- Gallery dead, i can be reached at any time in Tumblr:

FIGHT AND FEAR IN TUMBLR

And i can be reached at my e-mail tough e-mail is a little old style since it seems everyone have Tumblr now. Anyway, my e-mail is neo-devilman10@hotmail.com
Posted by DEVILMAN at 7/15/2016 09:22:00 PM No comments: