...person give such strong feelings of happynes? How a total stranger can give soo much to fantasy and can be soo cruel at the same time to stay burned in the dreams and desires?

Its been a few days and i still cant forget >_<

Anyway, last week we had a pretty strong earthquake that leave many buildings damaged and theres many chances that we have another one in the next 20 days. A stronger one and it seems the city is not going to resist

This was a collab that started like a request...a surprise request about Asuras Wrath, done by Karulox 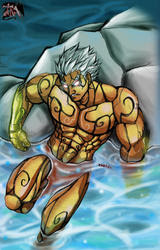 He did the sketch and i add the colors and he helped me a lot in there!!! Drawing water was pretty difficult >_< but Karu gives me a lot of tips and guided me. Wish i could paint like he does it D: i am not entirelly happy with the water but he was very patient with me xDDD

He can be found in Y! Gallery http://www.y-gallery.net/user/karulox/ and there he have links to all his other sites :D

And i just get the platinum trophy of Asura´s Wrath! Yay!!! The game have room for improvement but it was pretty awesome and damn fullfilling. Awesome character design (something new games forget...) and a very fresh and unique gameplay.

I dont know how Capcom publish the game tough and yet it have more important series in they basment, locked in the cell (Drakstalkers, Rival Schools) but i hope they stop doing useless RE games and they do more new series like Asura´s Wrath

I sooooooo NNNNEEEDDD to see this movie OMFG!!!!!!!!

Ehem...OK, now to other news. If someone wants to see my new art involving some Final Fantasy, go and visit Dinnosaur´s Prince Kingdom ;D

How have you been people? Still missing Y!? Y! had some issues with the rules but it was a pretty neat place and i can say i miss it D: I hope Asiandude and the other staff can fix it ;u;!!!!

Well now i am posting an Asura´s Wrath pic. I loved everything about the game since i see the first trailer years ago D: the character design was just....amazing....i wanted to draw those characters long time ago but now i finally did it...i dont know why >_<

Such a challenge... theres soo much going on in this guys xDDD theyr rocky texture, the golden leafes on his arms, the cracking, the marks, the strange looking abs D: at first it was Asura and his 6 arms but i decided to delete the arms and add Augus!

I am not entirelly happy since now i want to see Asura in a more dynamic pose <_< and i dont like the look of the water buuuuttttt i am happy its over D:!!!!! I soo want to draw this characters again x3!!! 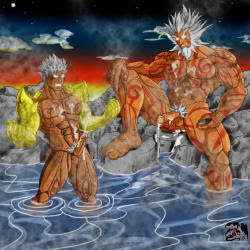 And a couple of days ago i buy the game :D!!! Hope i can play it this weekend x3!

Also...as a little side note about Soul Calibur V: