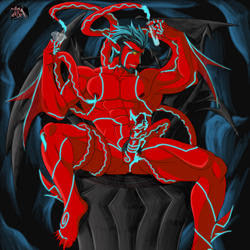 A Diato doing wath diato´s usually do. How original i am xD?

Sorry about the UGLY background...but anyway, i needed something dark to make him stand out a lot more xDDD soo a cave/lab was the only thing i could think about

This picture is for the Sablechan. Not because of Christmas and not because of his birthday, but because he has been a pretty cool and nice guy and his art is too awesome x3!!! I hope he dosnt mind and like this picture tough u_u it was supposed to be a side-project thingy but i ended up giving it a lot of my time and i loved it!

Draw this guy is just...soo amusing!!! His hairs where very difficult but i had a lot of fun doing even that and while i was drawing i felt how his colors where melting away my eyes D:!!!!! I cant shake the feeling he looks kinda...devilish...guess for the red skin? But i tried to stick to his original design as much as i could

Anyway, here is a close up for his eyes just ebcause i really liked it....i spent a lot of time on eyes and usually when i resize the image, the details get lost >_> A NOT VERY BLOODY VENGANCE

Soo a few months ago i posted an entry with the name of Blood Vengance....i was soo hyped about the news they where making a full scale movie of Tekken

This time with CG and made by Namco. It was too good to be reality and now the movie is out!!!!

It was hard to get around here but the Tekken Hybrid was an....interesting and odd package xD a movie, a HD remake and a demo....the HD remake of Tekken Tag Torunament is pretty awesome but its soo cute to see hwo simplistic are the graphcis and the gameplay and back then (in 2000) when the game was new, it ws the most amazing thing in the videogames world D:

The movie really made me smile :3 its such an amazing and fun experience. Soo odd, just like the game, and soo exciting at the same time. The power behind it is pretty impresive, the people who worked on RE Regeneration movie, the scriptwriter from Cowboy Beboop and Samurai Champloo, pretty amazing seiyus behind the characters, the action director of Devil May Cry, etc....

The character development is pretty good in the movie, all characters are solid (even the ones are only a camoe, like Lee Chaolan) and they act and talk in the way theyr are supposed to do it! Thats pretty amazing for a movie about a fight game. See Xiaoyu mentions his dream about a big Xiaoyuland or listen her theme from Tekken 3 while she does a combo where a few of the most amazing details

Even the fight styles of each character are perfectlly protrayed

The visuals are soo amazing even in the most boring moments. Just the 3-some fight in the last section of the movie is worth checking it o_o Mokujin was pretty badass xDDDD and i specially liked Ana Williams. I am soo glad they add her to the story

The story dosnt link too much with the Tekken lore. Its mor elike a side story. The new chaarcter Shin Kamiya was...pretty useless xDDDD i think the only part i remember about him is his nude scene on the shower. Xiaoyu is pretty cute and Alisa is...well.....i really hated her on Tekken 6 but after seen her last scene with the rocket punch, i like her a little bit more.

Now is there where the movie falls....isntead of focusing on the main characters of Tekken, the 70% of the movie focus on this sidecharacters - Xiao and Alisa - and they lesbic romance. Lots of soft yuri and romantic scenes starts to pop here and there and school life.....yhea with soo many characters in Tekken....they focused on the two girly teens.....

Alisa and Xiaos excelent adventures are pretty amusing, But i cant see how THAT can represent Tekken on a movie...in certain point, the two girls are tossed aside and the movie continue. The Mishimas finish the conflict, of course, because the girls are just eye witness and dosnt have anything to do with the affairs.

With such amazing visuals and character development, the movie feel kinda wasted with the two main characters....i didnt had too big expectations for it actually, maybe thats why i enjoyed it xD

I really hope they amke a new movie...this time triying to really show Tekken on all his glory and with more characters interacting. Miguel wasnt in the movie but Kazuya and Jin (and Ana) bringed more than enough sexynes to the screen soo better luck next time xDDD

Oh i canot forget either the last section of the movie....all of the sudden, it stops being Tekken and it turns into DEVILMAN!!!!!! I was pretty excited about it but i dont know how other people could feel about it....i really wish they used the classic Devil Jin design
Posted by DEVILMAN at 12/13/2011 03:17:00 AM 4 comments:

Hu.......i dont really know wath to think about it....i am glad they are re-starting the series with new characters, but this is NOT Metal Gear soo...i am not sure if i should feel excited about this game anymore xDDDD