TRASCENDING THE TALE OF SOULS AND SWORDS

This last days i been replaying a lot the Soul Calibur series with the excitment of SC V coming tomorrow!! I must say, while it seems it dosnt have as many games as other series, the evolution of the series have been quite shocking from the last generation to the corrent one o_o

Sadly, i cant say anything about Soul Blade....i never played that one and is soo expensive already ;_; but it sure had a badass opening xDDDDD

Soul Calibur leave me a little behind at first. I didnt played it in the original release date but i bought it later thanks to someone special obsession with the game xDDDD even with the old graphics, the game works surprisngly good and it have HWANG D:!!!!

Soul Calibur II now thats feel nostalgic...i remember how crazy went people about it (and the first one as well). I get the Gamecube version of the game just because back then i didnt have too many GC games (and i still only have a few >_>) and i had soo much fun playing with my sister and traveling in the Weapons Master mode with Talim xDDD I get all the weapons very fast even if i didnt use them at all

Soul Calibur III had some pretty odd new characters, but i was in awe to see how HUGE and improved was the game. From all the games it had the best story mode, the endings where much better than the retro endigns from 2, it had an obscene number of unlockables, loads of strange game modes, hidden cutscenes, amazing scenarios (the war rage scenario from Mitsurugi is still my fav level form all the games)

It even had Hwang and Rock back xDDDD as well as many many new side characters (like Amy). My only complaign would be how hard was the difficulty :(

Speaking of big jumps, Soul Calibur IV was the most different game from the series xD i was amazed with the graphics and the gameplay was fun but....outside of that....sadly thers nothing

And for some reason, looking at the records, is the Soul game i played the most >_<

Soul Calibur Broken Destiny was for me the lowest point of the Soul series....the graphcis and gameplay are perfect but theres literally NOTHING to do there xDDDDD is like...a mini game or an excuse to play if you feel the urge to play SC IV while your on the street >_>

I am soo excited for SC V but soo...anxious.....and confused as well to see Godzilla with sword and Charlie Chaplin there but no Taki, no Sestsuka, no Yunseong, no Rock....i have the feeling this game is going to be the Tekken 4 of the series. Evene if they add new characters, is just....not the same.....

Also, i am the only one who find anoying those guest characters? I love Ezio much more than any other guest characters xD but i seen people asking if SC V is an open world game or a linear game....it seems they dont even have any idea of wath kind of game is and they are just going to get it for Ezio. I see him in all the promo posters instead of the main characters

The game is still far away of being an off topic random selection of characters, like Street Fighter x Tekken that it transform into Capcom VS Namco now, but i would be glad if the next time Namco dont add guest characters xD and focus on continue the same style Soul Calibur III had >_>.....
Posted by DEVILMAN at 1/30/2012 02:45:00 AM 2 comments:

It seems i open this year with...Tekken...with Miguel, hu xDDDD? 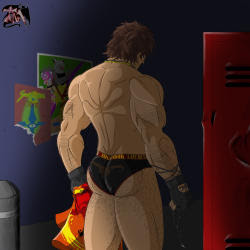 This picture actually have...more than a year, but just a few days ago i decided to pick one of my many Miguel sketches and give it a go. I pick this because it was a back side image soo it was going to be easy

I end up giving it TOO MUCH time to this!!! I was expecting to finish it in one day :( but the chains!!! Those chains!!!! And the LUCHADOR mark and the background (horrible Cartoon Network style background) where quite a challenge.

I dont know if i should post this with no background or shadows, to give a better look tough...wath do you people think?

Yes...a little teasing and i take some liberty with his underwear i know. I wodner waths he thinking? Maybe hes not happy because a ridiculous manequin with a pink wig kick his ass? Or maybe hes falling asleep...

EGG OF THE SUPREME KING

They are making a Berserk anime faithfull (for now) to the manga!!!!!! Is going to be a movie and it seems they really have in mind traslate all the sagas into movies/OVAs!!!!

At last an anime with dignity, originality and with a complete lack of school girls/teen-girls in sexual situations

The aniamtion have a lot of CG tough.....but oh well, i really wasnt expecting this.

Now i just need a new anime of Devilman to live happy forever and ever.