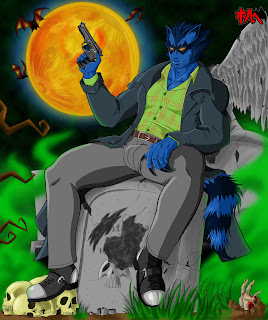 I am not really into comics at all, i rarelly tocuh one every few months but one of my very favorite is Nocturnals, by Dan Brereton and sometimes i wonder if i am the only one who reads them because find his books is extremelly difficult and expensive and still i hasnt meet too much people who knows the title and thats a damn shame, because it mix the noir with Lovecraft horror, gangster action with supernatural elements and the most autumnal characters and Halloween athmosphere. Really, this is the perfect comic book for every Halloween.

The Nocturnals are a group of monsters lead by Doctor Nicodemus Horror who lives on a cementery and have to keep theyr place in bewteen the criminal bands of the city while at the some time face the horrors of the night that prey on humans. While Doc Horror is an extremelly hunky DILF i always got more interested on Procyon Cleanhands, also known as Bandit. An hybrid between man and raccon that was developed on a laboratory of genetic enginering, he escapes captivity along other mutant hybrids and start a life of crime in the city. 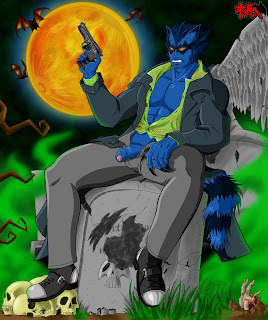 He ends being one of the most feared names in the streets given how feral and savage he is but also how cunning and thougfull, he even wants to take the place of Doc Horror as the Nocturnals leader tough ends forming a friendship with them thanks to him falling in love of Starfish, Doc Horror´s mermaid bodyguard that keeps punching Bandit on the face each time he trys something towards her.

There is very few fanart of Nocturnals and i am pretty sure this is the very first NSFW as well, wich is ironic given how the comic focus mostly on the womans shape, i hope Dan Brereton dosnt kill me for sexualizing his hunky racoon man. 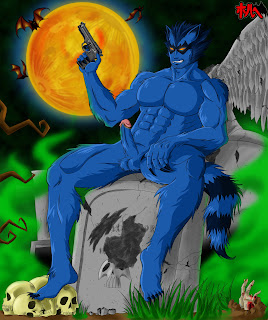 I know its been a long time since i post something but i been waiting to draw Bandit for years and given theres literally no fanart of him out there i tough i had to give it a try but it was really intimidating....Dan Brereton art is soo fantastic and amazing, at first i tough mimic his art style but i could never do such a thing soo i ended interpreting the character with my own style and while this dosnt fully look like i wanted and i almost dont post it, even with all its imperfections, i worked too much on this and give my best.

Draw is harder for me than ever before, but little by little i hope i can achive the level i want to reach eventually and i will start a new illustration inmedietly to at least update this place each month.